Summer is starting to turn, the days are getting shorter, and sooner than we know, the days will be dark and mysterious again. Just in time for another Clexmas Super Sexy Scary Challenge!

Clark and Lex are up against the things that go bump in the night. Your mission will be to take one of the prompts (or make your own) and give us a truly terrifying (or hilarious) (or romantic) story, vid, fanmix, or piece of art for Clark and Lex to be posted October 31.

See official rules and the list of prompts at the 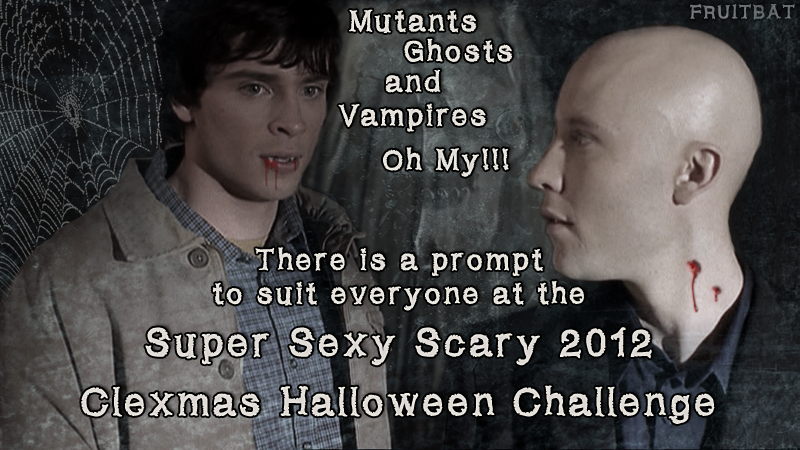 It's not too late to get in on the fun! Drabble up some Clex this weekend at the

Get some virgin!Lex up in here?

This post is being made to keep LJ from purging this community.

Beltane is upon us, and the magic of spring has come over Clark and Lex. Spring Break, April Fools, May Day, Spring Fever, Summer Heatwave…. What have you. So get your ribbons together and get ready to dance around Clark's Maypole and go nuts.

Lex is a virgin and all of those women we've seen him with are androids. Or even maybe the same android with different heads.

Well, maybe two -- to account for the psycho one from Bound -- with different heads.

Or 13 androids -- one per pair of earrings -- with different heads.

WARNINGS: Under age. Non-consensual. HEED THIS.

Summary: What happened after the events of Matter Over Mind? Lex and Bruce respond to what Clark did to Lex, and Clark responds back.

Notes: Sequel to Matter Over Mind, where Clark attends Excelsior and is not a nice boy. Everyone who read that wanted a sequel, and after working through some other projects, I outlined a sequel, then waited months to actually write, then took months to actually finish... Anyway, here's the rest of the story.

Link to the second part of the story at the end of the first post (grrr to lj size limits).

Title: Different Now
Author: Quiet Tiger
Pairing: Bruce/Lex
Rating: NC-17
Disclaimer: The boys do not belong to me, which is really quite a shame (but at least this way we can all share them, right?)

Summary: An accident puts strain on Bruce and Lex's relationship, but they try to work through it.

daylan_raynes has point me a few virgin Lex recs that I didn't know about! Look!

Whether it's a potion, a spell, or something else weirdly imaginative, go for it. You have the power to make Lex believe he's a virgin again. What does he do? General Rules - well, they're more like Guidelines really:
1) For this challenge, Lex needs to actually forget all of his sexual skills and experiences. He can get his memory back later if you want, but there's got to be something that makes him forget - potion? spell? new Kryptonite? electro-shock therapy? Convenient Head Trauma? Be creative.